← more from
Between Buttons
Get fresh music recommendations delivered to your inbox every Friday.
We've updated our Terms of Use. You can review the changes here. 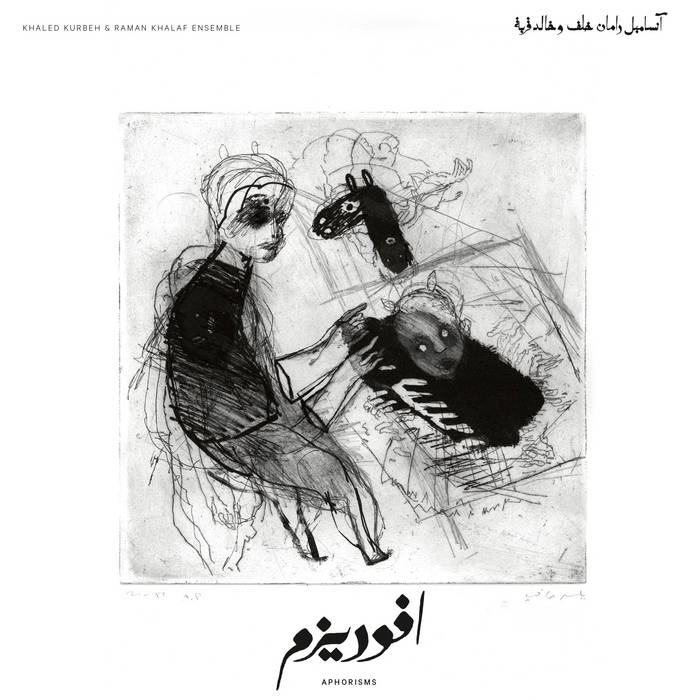 architecter Brilliant album, thanks for this

Engelram Syrian jazz band playing with friends from around the world. Carefully crafted, sad and beautiful.

Henrik Schwarz’s Between Buttons label is pleased to announce its second release, Aphorisms, is a six track debut record from Syrian musicians Khaled Kurbeh & Raman Khalaf Ensemble.
Raman Khalaf and Khaled Kurbeh are now based in Berlin but hail from Syria, and that shows in the music they have been making together since 2015. The years since have seen them perform at the likes of CTM, at the BBC Arabic Festival in London and Potsdamer Tanztage as well as on Piano Day at Funkhaus. Their sound mixes up Raman’s oud playing and vocals with Khaled’s piano and synthesisers, and ranges from largely acoustic, such as on this EP, to more electronic when performing live.

This new record was written by Khaled and Raman and was later recorded with an ensemble of Berlin based musicians. They have diverse backgrounds that range from formal classical studies at conservatories to virtuoso jazz musicians and include Tom Berkmann on bass, Moussa Coulibaly on djembe, Ashraf Kateb on violin, Matthias Ruppnig on drums and Nora Thiele on percussion.
“The record was written over the last two years and blurs lines between written music and improvised playing,” says Raman. Khaled then adds, “The pieces articulate our reflections on different topics such as solitude, absurdism, the simple man, and despair in a fictional musical narrative, hence the title Aphorisms.”

The music itself fuses ambient, jazz, minimal and world styles right from the off. Opener ‘Toska’ is an epic cinematic opener. It’s warm and gentle with oud and violins making for their own little chapters in the overall story. ‘Interlude’ is an absorbing passage of piano, double bass and synth and then ’To Kafranbel’ is nimble and dynamic as keys and oud sounds dance about. ‘Al Baseet’ is another upbeat number with hand claps and oud bringing a nice sense of groove to the Iraqi-style vocals up top, while ‘Shamal’ is a snippet of a long, bass driven studio live jam with claps, djembe and percussion before the pensive pianos of ‘Einsamkeit Impromptu’ round things out in tender fashion.

The artwork for this release is an etching by artist Yaser Safi and will come as 10 limited edition etchings printed at the Berlin Weissensee School of Art. It is a special final touch to a special debut record from this exciting new musical collective.

Released on Between Buttons
℗ 2017 Between Buttons
Special thanks to the musical and visual ensemble for their contribution to this project and also to Henrik Shwarz, Alexandre De Rham, Zaher Omareen, Eckhard Thiemann, Daniel Gorman, Zanoon Khalaf, Benedict Rosenkranz and Arthur Schopenhauer for all their support. This project is commissioned by Shubbak London's largest biennial festival of contemporary Arab culture.

Bandcamp Daily  your guide to the world of Bandcamp